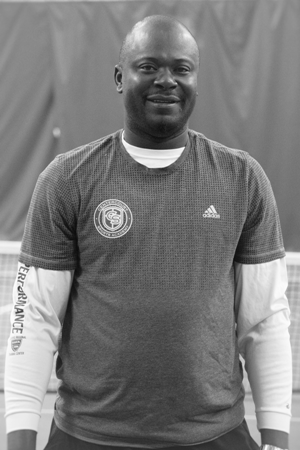 My favorite sports event/memory/moment is ... when I went to Maroc in 1997. Maroc is located in North Africa. During my time in Maroc, I had a chance to play with Malik Jaziri. Malek Jaziri (born January 20, 1984) is a professional Tunisian tennis player who reached the semifinals of Moscow in 2012 and Winston-Salem in 2015 and the quarterfinals of Dubai in 2014. Playing with Malik Jaziri inspired me in so many ways. I just wanted to be like him and play on the tour and motivated me to continue playing tennis.

Peity Chatrian Gnitou comes to Centercourt from Congo-Brazzaville. Gnitou started playing tennis at the Brazzaville Congo Club and began to compete internationally in 1990.  In 1995, as the #1 player in his country, he started to play in the Davis Cup.  In 1997, Gnitou became the captain of his Davis Cup team and remained captain until 2012 when he moved to the US and joined the Centercourt Tennis Profressional Team. Gnitou is married and has two children.