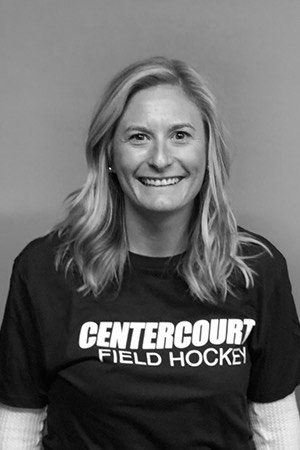 My favorite sports moment/event/memory is……..  beating the #5 team in the country for my first collegiate head coach win!

A native of Wall Township, N.J., Proud was a four-year starter as a forward for Eastern Connecticut State University, scoring 18 goals in 64 career games and serving as a team captain. During her collegiate career, Proud played internationally for the USA Athletes International field hockey program in Barbados.

Melanie Proud joins the coaching staff of Centercourts after serving as the Interim Head Coach of the 2018 season at Muhlenberg College and the Assistant Coach in the 2019 season. During her two year stint with the Mules, Proud helped the Mules to an overall record of 20-15, advancing to the semi-finals of the Centennial Conference Championship in 2018. Proud also helped 12  student-athletes achieve Academic Honor Roll and coached 6 selected athletes for All-Centennial Conference teams.

Prior to arriving to Muhlenberg, Proud spent two years as the Assistant Coach at Connecticut College in the NESCAC (New England Small College Athletic Conference). In her two years with the Camels, she helped mentor several student-athletes to earn a place on the NFHCA All-Academic Squad and NESCAC All-Academic Team. While also claiming consecutive National Field Hockey Coaches Association Academic Honors (NFHCA).

Coach Proud has a huge passion for growing the game of field hockey. She is the Owner/ Club Director of Lehigh Valley Sparx FHC.   Proud has also coached for HTC (Hear the Cheer) field hockey club based out of California, Connecticut and Massachusetts.