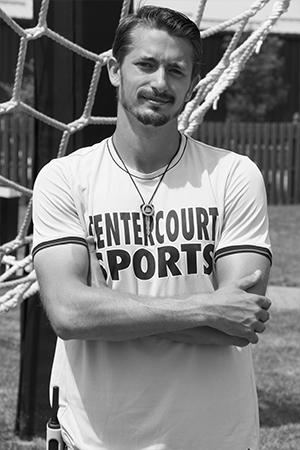 My favorite sports event/memory/moment is ...  when my little sister won worlds for BMX. Hearing the announcer shout "Courtney Provan just shot out of a cannon!" was one of the most exciting things I have ever been a part of. When she crossed the finish line, all the months of training we had gone through to make her that strong; the thousands of push ups, sprints, stair runs, and sit ups, they were all worth it. Seeing such an incredible change, from having less than a quarter lung capacity to her becoming a world champ, is what made me want to be a personal trainer.

Brayden Provan is a dedicated fitness coach who has worked and trained under some of the best fitness professionals on the east coast, including Philip Feingo. He has worked with players of all ages, coaching them in fitness as well as tennis, for the past four years.

Brayden Provan was a State champion BMX racer as well as an avid wrestler in his early years before joining the Centercourt team. He has been a member of the Centercourt team since high school, which is when he first got interested in physical training. He has worked with and trained under some of the best fitness professionals on the east coast, including Philip Feingo. Brayden has been working with and training athletes for over four years, and is now setting his sights on the exciting world of ninja warrior